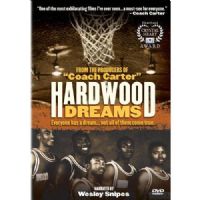 Pulse sobre la foto para ampliar
HARDWOOD DREAMS: TEN YEARS LATER
Título Original: Hardwood Dreams: Ten Years Later
Género: Documental
Año: 2004
Duración: (TV)
Director: Fredric Golding
Reparto: Wesley Snipes (narrador), Dwight Curry, Dominic Eliison, Sean Harris, Corey Saffold y Stais Boseman
País: USA
This excellent documentary follows 'Hardwood Dreams' and is worthy of attention for several reasons. First, it is rare for documentaries to This excellent documentary follows 'Hardwood Dreams' and is worthy of attention for several reasons. First, it is rare for documentaries to 'check in' with their subjects again, several years after they were made. This particular film re-visits its characters (subjects) 10 years later. The once-graduating high school seniors are now 27-28 years-old and coping with their own realities that are still intrinsically related to their dreams of becoming basketball players in the NBA.Second, the film plays out well because it stands on its own two feet and in many respects it is much more accomplished than its predecessor. It is somehow more complete than the first 'Hardwood Dreams' and its conclusions are far more shattering. That the African American community is still struggling with the same issues that it struggled with 10 years ago is only the tip of the iceberg. The reality is that young black boys still choose to pursue basketball despite their actual chances of success being minuscule.Nevertheless, the film's message is not necessarily a pessimistic one but rather an utterly realistic one. In one of the richest countries in the world, the USA, life in certain areas and for certain segments of the population follows rules that belong in a sort of medieval society ruled by violence, toughness and mere illusions of grandeur.Third, it is always somewhat metaphysical to watch characters 'then' and 'now,' as they evolve, mature, and realize that life often has a way to disagree with one's dreams for his life. This affords 'Hardwood Dreams: 10 Years Later' an almost philosophical perspective and tone.
Nuestro fondo documental contiene material relacionado con el baloncesto en general, y muy particularmente con el zaragozano.
Si usted desea aportar algún documento, fotografía, etc. o bien aportar datos para mejorar la información de los fondos existentes, puede ponerse en contacto con nosotros en el correo electrónico info@lacasadelbaloncesto.es